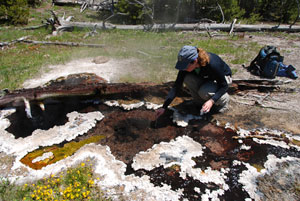 Research and teaching in the ESE program focus on the following areas:

Atmospheric composition and air pollution. Atmospheric composition research in ESE addresses fundamental questions about the processes that determine the trace gas and aerosol concentrations in the atmosphere and how they impact human health and climate. This includes research on greenhouse gas dynamics using remote sensing observations from ground and space-based sensors. Using IR remote sensing to evaluate losses of methane from the energy sector. Laboratory and in situ studies of gas phase and aerosol phase chemistry. Studying the interplay between marine warm cloud microphysical and macrophysical properties, aerosol levels, and large-scale dynamic/thermodynamic states. Studying the global patterns of change in cloud cover in response to forcing by long-term changes in the sea surface temperature.

Dynamics of climate. Climate dynamics research in ESE addresses fundamental questions about the dynamical processes that determine Earth’s climate, how these have varied in the past, and how they may change in the future. Research includes the large-scale dynamics of the atmosphere and oceans, addressing questions such as how atmosphere and ocean dynamics transport energy, water, and carbon in the climate system to produce the global distribution of temperature, precipitation, and ocean tracers; interactions between the ocean, atmosphere, and cryosphere in polar regions to better constrain estimates of future sea level rise; as well as the climate dynamics of other planets. Methods employed include theoretical and modeling studies, analyses of large remote sensing data sets, and field campaigns to collect atmospheric and oceanographic observations. Close collaborations exist with the Center for Climate Sciences at NASA's Jet Propulsion Laboratory.

A major new initiative in ESE is the Climate Modeling Alliance (CliMA). CliMA is a coalition of scientists, engineers, and applied mathematicians from Caltech, MIT, and NASA’s Jet Propulsion Laboratory. CliMA is developing a new Earth system model that leverages recent advances in the computational and data sciences to learn directly from a wealth of Earth observations from space and the ground, with the goal of improving climate predictions.

Biogeochemistry and climates of the past. Biogeochemical research in ESE finds application at scales ranging from microbial ecosystems to the global carbon cycle. Current research includes the marine carbon cycle and its geochemical record in organic matter and carbonate minerals; microbial recycling of nutrients and carbon; and development and use of geochemical proxies for understanding the ancient environment, including its climate.

Environmental microbiology. Microbiology research within the ESE program focuses on revealing new details on the form and function of microbes relevant to freshwater, soil, marine, and engineered ecosystems, as well as on improving upon existing methods and tools for use in these studies. For example, one area of activity has been the development and application of novel molecular and isotopic approaches for making connections between specific microorganisms and activities relevant to important biogeochemical cycles of carbon, sulfur, iron, and manganese in the subsurface and deep ocean. Another area has been the design and implementation of distributed waste and potable water treatment technologies adequate for use in developing countries, along with field portable and inexpensive pathogen detection techniques for quantifying disease-causing microbes present in drinking water and freshwater. ESE faculty play leadership roles in Caltech’s Center for Environmental Microbial Interactions (CEMI), a multidisciplinary research center that connects microbe-centered research and researchers within ESE and across all of Caltech’s different programs.

Terrestrial carbon cycling, hydrology, and landscape evolution. Terrestrial carbon cycling, hydrology, and landscape research in ESE uses field and laboratory measurements to build and test quantitative models for the processes that drive changes in terrestrial ecology, water cycle and landscapes. Current topics in landscape dynamics include the effect of wildfires on landscape sediment yield, erosion of bedrock canyons by rivers and floods, sediment transport in steep mountain streams, climate change as recorded in ancient river-bed surfaces, and connecting river sediment sources to their oceanic deposits. Applications include river restoration for fish habitats, mitigating debris flow and flood hazards, extracting paleo-climate information from landscape topography, and reconstructing water and petroleum reservoirs from sedimentary deposits. In hydrology research, we are developing new models in combination with laboratory experiments to understand how climate change will impact water cycles in semi-arid and cryospheric environments. In terrestrial carbon cycling research, we are leading the biophysical and soil biogeochemical model development within Caltech’s CLiMA modeling initiative. A combination of remote sensing, field measurements and theory development is being used to develop and improve next-generation carbon cycle models for the local to global scale. 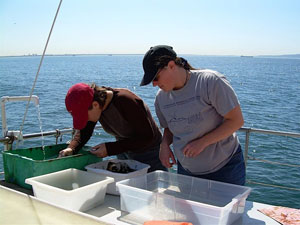 Professor Orphan and a student search for benthic invertebrates in a sediment box core during a student cruise to the Santa Monica Basin.